Racing Tempest sailboats is popular because it is both fun and challenging. It is definitely more fun when you do well. All sailors in the Long Beach Tempest fleet are encouraged to ask for help, or simply to ask questions whenever they want to improve their racing skills. The attitude in the Long Beach fleet is that we all win when everyone is sailing and racing well. If someone is struggling, they are encouraged to ask for help. 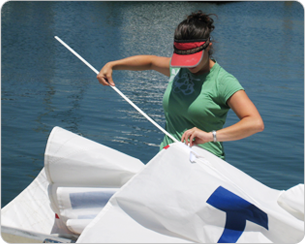 Doing well in sailboat racing requires that you master the following three sets of skills:

Boat speed is often a blend of having good sails, a well-rigged boat and experience in driving the boat. Boat speed is incredibly important on the first leg of the course because of the “multiplier effect” of the second leg. Let me explain very briefly. When you are sailing upwind with a tacking angle of 90 degrees, which is typical for a Tempest, that portion of your speed which is actually getting you closer to the weather mark is about 70 percent of your speed through the water.

Given the critical nature of getting to the weather mark first, boat speed on the first leg of the race is incredibly important. For this reason, you really need to work on boat speed before the race starts. Here are some tips:

On your practice sail upwind before the start, check out the wave pattern. If you will be sailing into the waves after the start, you may want to modify your normal sail trim to allow extra power for getting through the waves. This could as simple as figuring out how much looser the jib sheet should be or how much more twist you want in the leech of the main to allow you to sail slightly higher or lower than optimal, to find the best path through the waves.

Figure out whether you will need to point as high as possible right after the start. If you know that you will be starting in a group of boats, the boats to leeward of you will sail as high as they can to try to force you to tack. Your best defense is to be able to sail at least as high, making it difficult for them to get too close to you. If this is the case, modify your normal sail trim to “high-pointing” mode for whatever wind speed you will be in. As soon as you clear the normal starting-line congestion after the start, or you determine that the boats to leeward of you are not pointing higher than normal, you can adjust your sail trim for more speed.

The above discussion is presented as a sample of what USITA Long Beach covers in a class on boat speed.

Having convinced you how critical boat speed is on the first leg of the race, it should be apparent that boat handling is also critical. How many times do you tack between the start and the weather mark? If you are losing speed on every tack, all your work on improving boat speed could be for naught. For this reason, you really need to practice your tacks with your regular crew. If you don’t have a regular crew, consider becoming a nicer person to be with, or be more generous with the beer money after the race.

If you are a nice person and still can’t find a regular crew, resolve yourself to sailing with people with whom you have not practiced. To make this as easy as possible, use colored control lines. In the middle of a jibe, telling your crew to “pull on the red line” may mean much more than “pull on the twing line.” Here’s a radical thought. If you do have trouble finding a steady crew, try crewing for a guest skipper. Because you are a skipper, you already know it is a lot easier to teach someone how to skipper a Tempest, than to crew on a Tempest.

How much thought do you put into placing your tacks? If you are sailing in relatively flat water, this may not be an issue, but if you are sailing in a chop, the last thing you want to do is tack right before you sail into a wave. The combination of losing speed during a tack and losing speed as the boat runs into a wave is going to kill your boat speed. The best time to tack is at the top of wave. As you go through the tack, you will be accelerating down the back face of the wave.

The next big factor in good boat speed is making your boat user-friendly. Do all of your fittings work? Is anything sticking or is it difficult to adjust? Your best friend is going to be a can of McLube lubricant. Even if every block on the boat is a ball-bearing block, they will run better with McLube One Drop lubricant. If you have a spinnaker launcher, spray the inside of the opening with McLube Sailkote. Lay the spinnaker on the lawn at home or at the yacht club and spray both sides with McLube Sailkote. For everything else on the boat, such as the traveler track and the inside of your windward-sheeting traveler car, spray it with McLube Sailkote. Finally, if a fitting is broken, replace it with one that works.

After everything is moving freely, check out your control lines and sheets. Are they easy to grip, and do they run freely through the blocks? If not, you may want to use softer line. As a good starting point, go with line constructed with a polyester core and a polyester cover. This line may stretch a bit more than the “high-tech” lines, but it is easy on the hands and runs freely, which is exactly what you need to promote good boat handling. For control lines, such as the Cunningham – which you use a lot – try using 5/16” line instead of 1/4” line. This will make it is easier to grip and pull, which also contributes to good boat handling.

If you want your wife or your girlfriend to sail with you, make sure that the boat is “female-friendly.” Take a look at how much strength it takes to pull in the jib sheet, main sheet or spinnaker sheet. Even with a 6:1 mechanical advantage, pulling in the main in a stiff breeze can be a real challenge for a female skipper. Fortunately, Harken has a whole range of “coarse/fine tune” main-sheet systems that are readily adaptable to the Tempest. Tom O’Hara and Brigid Galford, a very successful male-crew, female-skipper combination have won a North American Championship using this set-up. Even in heavy air, Brigid had no trouble pulling in the mainsheet, using the fine-tune section of the Harken set-up.

Let me use this space for putting in a plug for copying the set up used by the guy that is beating you. There is an independent streak in every sailor. They just hate, absolutely hate copying anybody else’s boat set-up. Break down, ask your competitor why he rigs his boat the way he does, and if it make sense to you, copy the idea.

Because the set-up in a boat can have such a dramatic effect on boat handling, USITA Long Beach has adopted a standard set-up for the core group of five boats which are chartered to people who are new to the class, or cannot afford to own their own boat.

Finally, take a day and practice boat handling. Go out and sail several upwind and downwind legs, tack your brains out, raise and lower the spinnaker a bunch of times, jibe downwind as much as possible and work out the best way to do everything smoothly and without a lot of communication. During a race, you don’t have the time to sort things out, so go practice as much as possible. Ideally, boat handling should become second-nature to the skipper and crew. When this happens, your enjoyment of sailboat racing will go way up.

Strategy is your overall game plan, whether it is your plan to win one leg of a race, a race, a regatta or a season championship. Tactics are the steps that you will use to execute your strategy. For example, before the race, you discover that the right side of the course is favored. You will use the appropriate tactics before and after you start to make sure you can sail up the right side of the course to the weather mark.

We see no point in using this website to present a course on tactics and strategy when there are so many excellent references already on the market. In addition to Speed & Smarts, Annapolis Performance Sailing (APS) carries an excellent selection of books. Instead of buying just one copy, buy two. Give one to your skipper or crew and keep the other for yourself. Get together periodically to discuss what you are learning and how you can use your newfound information. Think of a situation where you lost the lead or lost several positions because of a “dumb mistake.” Discuss what you might have done differently, using the tactics and strategy you now know.

To pick up valuable tips on tactics and strategy, corner the winner of the race in the club bar after racing is over or when they are relaxing after washing their boat and ask them how they did so well. You may be surprised at how many winners will tell you exactly what they did. One reason is that winners doubt you could beat them even if they told you exactly what to do. The other reason is that most winners are genuinely nice people.

Finally, we come to local knowledge. Never underestimate local knowledge. Corner top skippers who sail regularly in your area and ask them to tell about what they learned about getting the most out of the local conditions. The trick is to talk to as many skippers as possible and combine everything you are told. This way, you will wind up knowing more than most of the skippers you talked to.